This squadron has one core task; to be at service of all personnel employed at the 10WTac.

After the first acquaintance, every new employee will quickly appreciate and enjoy some of life’s necessities

These are the personal services for each employee. However, the support squadron is also involved in the maintenance of the Wing’s infrastructure; the “Ops Infra”. They do the maintenance and/or refurbishments of workshops, storages and offices.

The Permanent Airfield Service team (PAS) is a team that does a daily inspection of the airfield lighting system and the arresting cable before the start of the flying window.

“Service” is highly valued by the Support Squadron, which makes them appreciated by many colleagues !

Patronage
On the 26th of September 1968, the city of Maaseik accepted the patronage of the Defense and Support group of the 10th Fighter-Bomber Wing Helchteren thanks to an initiative of the local Milac-department. On the 22th of October 2004, at the 35-year anniversary of the patronage, the charter was renewed because of multiple changes in the structure of the Wing as well as in it’s name. During this ceremony, the city of Maaseik, offered a replica of a painting of the “Gebroeders Van Eyck”. This painting can still be admired at the 10WTac’s Public Relations service.

In 2001, the patronage was reinforced by also accepting the patronage of the Medical and Pedagogic institution Ter Engelen, situated within the walls of the city of Maaseik. This charter was signed on the 19th of November 2001 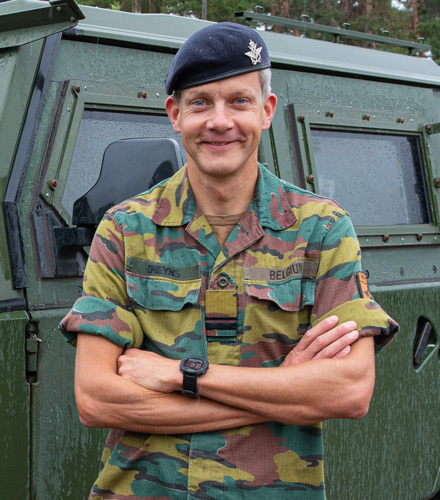