At the end of the Second World War, in 1944, the Allies established the tactical airfield B 90 in Kleine-Brogel to support operations in the Rhine area.

In 1951, the Belgian Air Force further expanded the base as the home of the 10th Fighter-Bomber Wing, which was first established in Chièvres on December 20, 1951. The three squadrons of this unit, the 23rd, the 27th and the 31st, initially flew with Spitfires and as from 1952 on F-84G Thunderjet. The F-84G was replaced by the F-84F Thunderstreak in 1956 and the squadrons specialized in the various bombing missions under the NATO strategy. As from 1962, an American support detachment was stationed at the base.

After the dissolution of the 1st Fighter-Bomber Wing in Beauvechain in 1996, the 10th Wing received new units and assignments: 349 Fighter Sqn, specialized in air defense and the Operational Conversion Unit, responsible for the training of all F-16 pilots. The 23rd squadron was merged with 31 Sqn in a reorganization in 2002.

Emblem en traditions
The 10th Wing has chosen the emblem of the red lion to strengthen the connection to the province of Limburg. The motto of the unit is "Fortuna Favet Fortibus" which we can translate as "Fortune favors the bold". 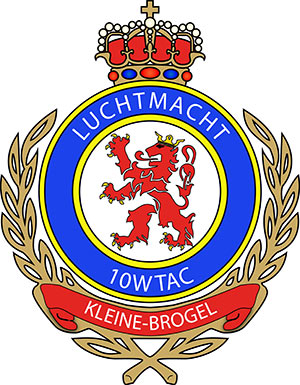 The base bears the name of Major General aviator Count Ivan Du Monceau de Bergendal. General Du Monceau was the most successful Belgian fighter pilot in the Royal Air Force during the Second World War. In 1941 and 1942, he flew with Spitfire in 609 Sqn and 350 Sqn and in 1943 and 1944 he was the Commanding Officer of 349 Sqn. He was awarded the Distinguished Flying Cross twice. On May 30, 1952, he became the first commander of the 10th Wing in Kleine-Brogel.

He ended his brilliant career as a pilot and officer as the commander of the Tactical Air Force.

Tasks and assignments
Due to the versatility of our personnel and our main weapon system, the F-16, the 10th Tactical Wing has been able to fully adapt to the various tasks in the new security environment.

In addition to the traditional NATO defense missions, for which 349 Sqn specializes in air defense and 31 Sqn excels in multi-role missions, the 10th Wing can be used for crisis management. Detachments from the 10th Wing can participate in national operations or missions under the flag of the European Union or the United Nations.

Even in peacetime the 10th Wing ensures the protection of our airspace, by providing the “Quick Reaction Alert”, 2 F-16’s that are ready to scramble and take off within 15 minutes at any given time.